Oh, my. It’s been some time since we’ve published anything new. We actually have had some potential submissions and some ideas for content, but what really happened is that life got in the way. KaeLyn started writing for Autostraddle, where she gets to write about queer family stuff and also music and fashion and politics and art and life. KaeLyn also went back to grad school because her credits from earlier graduate work were about to expire and she didn’t want to start all over again. Plus she is still working her full-time job and another side job. Waffle is still working nights six days a week.

We both (but especially Waffle) got fixated on a fan blog for Sleep No More that we created about a year ago. And we went on a child-free bender, of sorts, becoming absolutely obsessed with an immersive theatre production in NYC and the international community of fans surrounding it. We have seen the show 35 times now over two years, mostly in the last year (which is actually not that much compared to some fans). 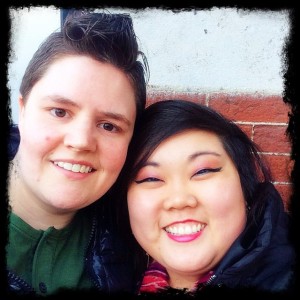 Just some adult kids in love with a building and giving no-fuks.

It cost an amount of fun-money that we are kind of embarrassed to fess up to. We like to think we were practicing for having kids a.k.a. throwing all our disposable income into a vast pit and burning it. (Current average cost of raising a child in the U.S. is $245,000!) But really we’ve just been having a great time being childfree adults who can jump into the car and drive to NYC on a whim. It’s been grand!

But we’ve finally decided to buckle down. We knew it would take us about two years to get it all together and it has. Financially, we have some money set aside and we’re realistic about what it might cost altogether and we’re prepared to deal with it. Emotionally, it took us a while to feel “ready” after we made the decision. We didn’t want to jump into it. We (especially KaeLyn) wanted to do the very queer work of over-processing, thinking about all the angles, discussing and debating what was important to us. This blog was an important part of that process. We met people online and IRL who had gone through these processes and many people who wanted to someday. We found the resources we were looking for. We wrote the words we felt we needed to write just to get them out. And we’re damn ready.

In fact, we had our first appointment at the fertility clinic exactly a week ago from today. Since then, KaeLyn has been back two times and will be going again tomorrow for tests. We’re getting ready for our first round of IUI in September. If we get knocked up, we plan to keep it hush-hush until we know for sure that it’s going to stick, but we are officially trying!

Our first appointments were efficient and helpful. The staff is phenomenal. They are trying to preauthorize her for coverage because KaeLyn actually has great infertility coverage through her health insurance. However, she has Cigna and we are fairly certain they won’t accept the preauthorization unless she is “medically infertile.” But we were prepared for that and we feel lucky to be able to afford this, even if it may involves racking up some more credit card debt once we run through our stash of savings.

We have (over)thought a lot about what we want, so we were fairly sure of ourselves going into the clinic. The info was helpful and thorough, but most of it wasn’t new to us. We had a very warm mandatory session with a fertility counselor and came out feeling reassured. We’d considered a lot of the questions already and we felt even more ready to do this damn thing. That said, the only thing we know for sure is that we know nothing. We won’t know how anything will be or feel until we get there and we both reserve the option to change our minds about the things we think we know, at any time.

All the paper we have accrued over the past week. It’s getting real!

We plan to post a bit more now that we are coming back to earth from our year of irresponsible-but-really-really-fun-immersive-theatre-fandom life decisions. We have a couple more trips to the show planned, but it is slowing down. KaeLyn is about to go off of one of the boards she is on and will wrap up grad school after this semester (December 2015). She is quitting one of her three jobs this fall, too—one of her side gigs (but will still be writing for Autostraddle and keeping her full-time employment). Waffle is working his butt off, going in for overtime twice a week, when possible. We are holding off on any major purchases or home renovation projects. The time has come! We’ll make sure we keep ya’ll posted.

In the meantime, check out this post on baby-making questions KaeLyn wrote for Autostraddle. The post is similar to what you’ve already read here, but the comment section is really interesting and full of great stories and questions! She is hosting an AMA on queer parenting (with queer parents and parents-to-be) on Autostraddle very soon. We’ll let you know when that is happening, too!

W and I are both 100% in support of reproductive rights and health. I worked at Planned Parenthood for half  a decade. During my time there, I got into reproductive justice. I got in deep. I learned a lot from others in the movements. I also spent a lot of time helping others, especially those deeply rooted in pro-choice activism, to “get” what repro justice is. Pro-choice and repro justice aren’t synonyms. Here’s a definition of reproductive justice from SisterSong:

The reproductive justice framework – the right to have children, not have children, and to parent the children we have in safe and healthy environments — is based on the human right to make personal decisions about one’s life, and the obligation of government and society to ensure that the conditions are suitable for implementing one’s decisions is important for women of color.

It represents a shift for women advocating for control of their bodies, from a narrower focus on legal access and individual choice (the focus of mainstream organizations) to a broader analysis of racial, economic, cultural, and structural constraints on our power.

Reproductive Justice addresses the social reality of inequality, specifically, the inequality of opportunities that we have to control our reproductive destiny. Our options for making choices have to be safe, affordable and accessible, three minimal cornerstones of government support for all individual life decisions.

Repro justice takes the conversation beyond birth control, abortion, and sex ed and makes us ask questions like:

I could write a whole post about any of those topics. There are lots of questions to raise. The question I want to address is this one: Who has the right to parent?

We can go on for days about the right now to be a parent, the right to make a personal abortion decision. We don’t talk as much about the flip side. What about the right to be a parent? Is there such a thing? Many would emphatically say, “Yes. Of course. Everyone should have that right.” But let’s get real. We don’t all have access to that right. And if you add some other factors in, you may start to feel more unsure. END_OF_DOCUMENT_TOKEN_TO_BE_REPLACED